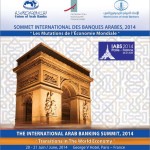 Arab Bank’s Chief Executive, Nemeh Sabbagh, was named Arab Banker of the Year 2014 during an award ceremony on June 20 at the International Arab Bank Summit 2014. The event was hosted by President François Hollande and organized by the Union of Arab Banks in cooperation with the Fédération Bancaire Française and European Banking Federation. As part of the award ceremony, Chief Executive Sabbagh delivered a speech to an audience of ministers of finance, governors of central banks, leading bankers, policymakers and representatives of the public and private sectors from the Arab and international economies.