There is no proof that anything but routine financial services to the charities alleged to be front organizations were provided, and none of the charities were designated by the United States as front groups when the charities received services from the Bank. - Judge Jack B. Weinstein

Mati Gill, a dual U.S./Israeli citizen, brought claims against the Bank in 2011 alleging that he was injured in a shooting perpetrated by an alleged Hamas operative along the Israel-Gaza border. The claims in the Gill case were similar to those outlined throughout this site.

On September 12, 2012, Judge Jack B. Weinstein dismissed Gill’s aiding and abetting claim, finding that the ATA did not provide for secondary liability. Following that decision, on November 6, 2012, Judge Weinstein granted Arab Bank’s motion for summary judgment and dismissed the Gill case in its entirety. [Read the full opinion here.] This decision marked the first time in which a court had weighed the totality of the evidence against the Bank. In his decision, Judge Weinstein wrote that “Plaintiff must establish by a preponderance of evidence that the Bank recklessly, knowingly, or intentionally, and proximately caused plaintiff’s injuries, either by the Bank’s own actions or in a conspiracy with Hamas or other terrorist organizations… It cannot do so.”

Go here to read the Gill Court’s decision to grant summary judgment, dismissing the case against the Bank.

On November 9, 2012, Arab Bank filed a letter to the Second Circuit Court of Appeals submitting this decision as supplemental authority. 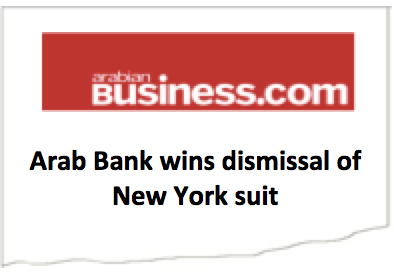 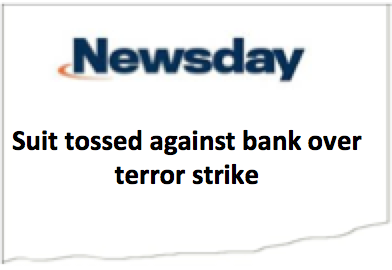